The quote rang out in my mind:

“Your past and present circumstances do not have to determine your future or your identity.”

This quote would become my motto. A new identity in Christ. It not only became a foundation for much of what I teach and preach today, it became the premise for a series of books I’ve written called The Freedom Series.

God provided a way for all of mankind to undergo a transformation of such proportion that everything we’ve ever done would not only be forgiven, it would be completely eradicated through a legal term: Justification.

And justification gives us a new identity in Christ!

Governor Pilate did not want this case before him. He had sent it to Herod Antipater, the Tetrarch of Galilee.

Here it was before him again.

Standing in front of him was the man Jesus of Nazareth. Behind Him was the unruly Jewish mob demanding the crucifixion of the one called “King of the Jews” while calling for the release of a rebel.

The significance of this scene might have escaped the Roman Governor; but his wife knew. “Have nothing to do with that just man…” was her message to him. “I have suffered many things in a dream because of Him.”

The crowd was screaming louder as the Jewish leaders agitated them to call for the crucifixion.

The two men stood in front of the Governor, facing the crowd.

One had been up all night; face swollen from several beatings; bruised and bloody from the mocking abuse; wearing a very expensive purple robe given to Him by Herod.

The other man had just been brought from prison; a known rebel; convicted of robbery and murder.

Barabbas was his name.

An exchange was about to be made; an exchange that would affect eternity.

“Give us Barabbas and crucify Jesus who is called the Christ,” crowd yells!

Jesus is the Hellenic form of Jeshua (Jehovah is salvation).

He was raised in Nazareth as the son of Joseph. Jeshua bar Joseph (Jehovah has added). That was His earthly family. Actually, Joseph was not His father.

He was conceived of the Holy Spirit and born of the virgin Mary. His father was God, Himself. His proper name is Jesus Son of God – Jeshua bar Jehovah.

Governor Pilate is about to exchange Barabbas (the son of father) for Jeshua (Jehovah is salvation) bar Jehovah.

God will allow “the son of father” to be set free, just as if he had never done anything wrong.

Discover how you can move beyond your past to a future of promise and hope in my book Discovering True Identity.

Get Discovering True Identity 30% off today with the coupon code: Identity

He will allow the completely innocent “Jeshua Son of God” to be condemned, scourged and put to death.

The innocent is being exchanged for the guilty. It is a visual of what was happening at that moment in the heavenly spirit realm.

The just condemned on behalf of the unjust!

Have you caught the significance? Do you realize what this means?

You Can Live Free From Your Past

You have a new identity in Christ!

When you are born again, you and I no longer HAVE to live out of our old identity.

You are no longer Barabbas – son of your father having to live by the iniquity, sins and generational curses of your lineage.

You are Bar Jehovah – a son of God.

You have a new identity with a new lineage.

You no longer have to live “after the flesh” and the old identity.

You are a whole new creation living in the power of that same spirit that raised Jesus from the dead. The exchange has been made. You are redeemed! (Romans 8:11-14; 2 Corinthians 5:17-19).

If you enjoyed this podcast, please consider leaving us a review. This helps the Foundational podcast reach more listeners. Be sure to tell a friend about the Foundational blog and podcast, and share with them about the free Bible Reading Challenge journal they will receive when they subscribe to receive my newsletter!

Discover how you can move beyond your past to a future of promise and hope in my book Discovering True Identity.

Get Discovering True Identity 30% off today with the coupon code: Identity 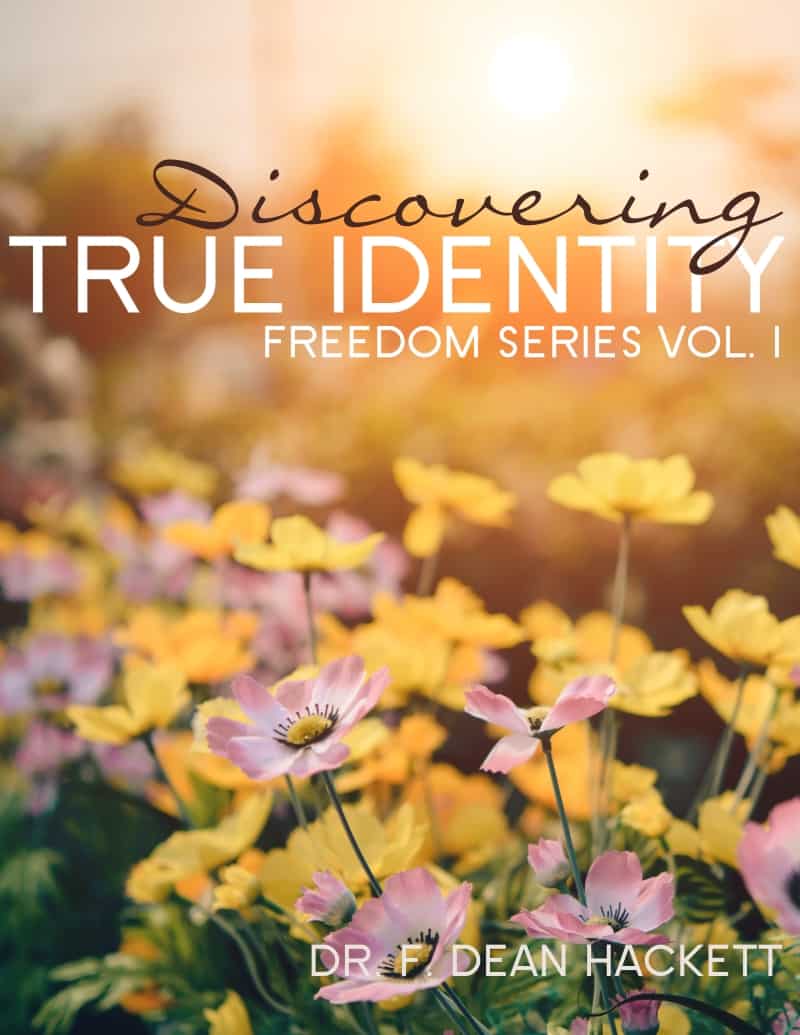 F. Dean Hackett has served in full time Christian ministry since October 1971. He has ministered throughout the United States, Canada and Europe, serving as pastor, conference speaker and mentor.

He has planted four churches, assisted in planting fifteen others, and currently serves as Lead Pastor of Living Faith Church in Hermiston, Oregon.

Dean has been married forty-five years to his wife, Wanda. They have three children serving in full time Christian ministry. Their two daughters are missionaries in Croatia and their son is planting a church in Portland, Oregon. They have nine grandchildren.

Dr. Dean is known for training many leaders who are presently in full time ministry around the world. He has completed a Masters in Ministry, a Masters of Theology and a Ph.D. in practical theological with an emphasis in marriage and family counseling. His enthusiastic and challenging ministry has made him a popular teacher and conference speaker. He has written eight books and is presently writing the third book in a trilogy Freedom Series.

Dr. Hackett founded Spirit Life Ministries International in 2001 to facilitate ministries in Croatia and Bosnia Herzegovina and to open a training center for workers in those nations.

I hope you love the products and resources I recommend here at Foundational. It is possible that I get a commission and collect income from the links on this page. Click here for more info. From the very first prophecies about the birth of Christ, there is a consistent dual prophecy about both the present…

I hope you love the products and resources I recommend here at Foundational. It is possible that I get a commission and collect income from the links on this page. Click here for more info. “If we can just get them in church…” I have heard those words time and again from a desperate parent;…

I hope you love the products and resources I recommend here at Foundational. It is possible that I get a commission and collect income from the links on this page. Click here for more info. If we are going to build an ark of safety for the family, we need to hold the principles of…

I hope you love the products and resources I recommend here at Foundational. It is possible that I get a commission and collect income from the links on this page. Click here for more info. Show Notes For This Foundational Podcast: You are royalty! We often struggle with our identity When we were born again…

I hope you love the products and resources I recommend here at Foundational. It is possible that I get a commission and collect income from the links on this page. Click here for more info. Is it just me, or does it seem the majority of people have a hearing problem? More to the point,…

I hope you love the products and resources I recommend here at Foundational. It is possible that I get a commission and collect income from the links on this page. Click here for more info. You were created to live a blessed life. All throughout the Bible, even starting in Genesis when God commanded Adam…

No products in the cart.

Foundational
We use cookies on our website to give you the most relevant experience by remembering your preferences and repeat visits. By clicking “Accept”, you consent to the use of ALL the cookies.
Do not sell my personal information.
Cookie SettingsAccept
Manage consent

This website uses cookies to improve your experience while you navigate through the website. Out of these, the cookies that are categorized as necessary are stored on your browser as they are essential for the working of basic functionalities of the website. We also use third-party cookies that help us analyze and understand how you use this website. These cookies will be stored in your browser only with your consent. You also have the option to opt-out of these cookies. But opting out of some of these cookies may affect your browsing experience.
Necessary Always Enabled
Necessary cookies are absolutely essential for the website to function properly. These cookies ensure basic functionalities and security features of the website, anonymously.
Functional
Functional cookies help to perform certain functionalities like sharing the content of the website on social media platforms, collect feedbacks, and other third-party features.
Performance
Performance cookies are used to understand and analyze the key performance indexes of the website which helps in delivering a better user experience for the visitors.
Analytics
Analytical cookies are used to understand how visitors interact with the website. These cookies help provide information on metrics the number of visitors, bounce rate, traffic source, etc.
Advertisement
Advertisement cookies are used to provide visitors with relevant ads and marketing campaigns. These cookies track visitors across websites and collect information to provide customized ads.
Others
Other uncategorized cookies are those that are being analyzed and have not been classified into a category as yet.
SAVE & ACCEPT